The handheld Accessport V3 has a large, full color, higher resolution screen which allows you to monitor up to six parameters in real time. Fully customizable from the look (multiple bezel colors), layout (set up a race, street or dyno gauge cluster) and mounting options (choose from 1,000s of standard vehicle mounts). Of course, all of the great COBB tuning is included - with enough space for 100 calibrations. This is your new Accessport - and maybe the last one you'll ever need.

All Performance Maps are pre-loaded on the Accessport.

Made from titanium and designed to create a better and smoother exhaust flow, the Akrapovic Link Pipes with 100 cpsi high-flow catalysts are the next step in the tuning process and can be easily installed with the Slip-On Line system. Giving further weight savings over stock—when used in conjunction with the Slip-On—the combination of this pairing highlights the exceptional character of the Porsche boxer twin-turbo engine. The improvement in performance is further enhanced by the unique sound the Akrapovic engineers have produced. The distinctive roar from this superb engine gets noticeably louder and more complete as the revs rise, without creating an uncomfortable noise in the cockpit. To complete the quality finish, the surface of the link pipes is treated with a coating to increase durability, without changing the appearance when upgrading an Akrapovic exhaust system with the link pipes.

The Akrapovic Slip-On Line for the Porsche 911 Turbo / Turbo S is the first stage in the exhaust tuning process and gives this already outstanding car a further step in performance. Made from a high-grade titanium alloy and finished with exquisitely handcrafted carbon fiber and titanium tailpipes, the Slip-On Line reduces weight to aid in handling. Akrapovic’s sound engineers have also created a deep and unique sound to make the Porsche 911 Turbo / Turbo S stand out even more.

CSF Cooling is proud to announce the official public release of its Porsche 991 Turbo & Turbo S high performance intercoolers for both 991.1 & 991.2 models. Since the intercoolers made their official world debut at the 2017 SEMA show, a unique sales decision was made to only release these intercoolers (for a period of 1 year) to a select group of the world’s most highly regarded Porsche motorsport ECU tuners and vehicle builders. Over the past year, CSF’s Porsche 991 Turbo intercoolers have been race-tested, logged, and fully validated by some of the world’s best Porsche tuners. These intercoolers have been regarded as the “Go-To” option for the best performance and value available in the performance aftermarket.

Validation of CSF’s Porsche 991 Turbo Intercoolers started with a GMG Racing modified vehicle with typical bolt-on modifications and a stage-1 tune. Extensive dyno testing was completed over a 4-day period with similar ambient air temperatures in a controlled dyno cell and were conducted at similar times in the day (Early morning and afternoon to control air density variability). These tests consisted of several real-world test simulations with data proving a massive increase in performance and heat rejection of the CSF Porsche 991 Turbo Intercoolers.

The Accessport V3 is the world's best selling, most flexible ECU upgrade solution for Porsche. Unlock power hidden within the vehicle by replacing conservative factory settings with more aggressive calibrations. Upgrade forever with off-the-shelf (OTS) calibrations for most bolt-on modifications. It's the last engine management solution you'll ever need.

Increased Minimum Shift Points
This feature increases the lowest RPM at which the PDK will shift to the next gear in Normal and Sport drive modes. 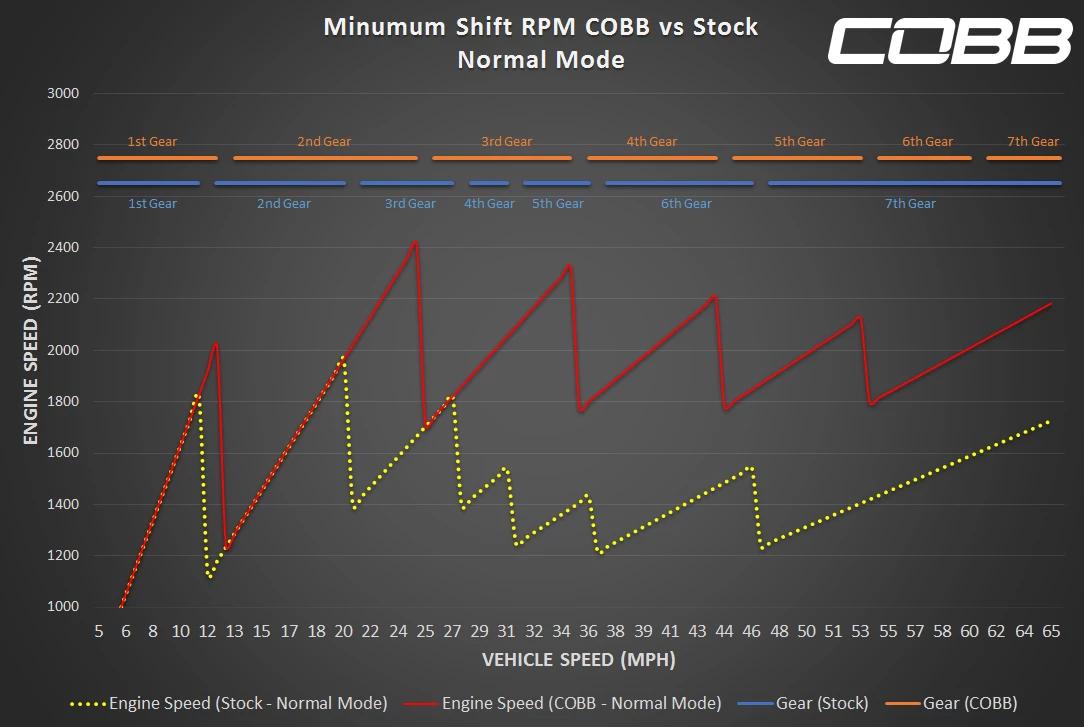 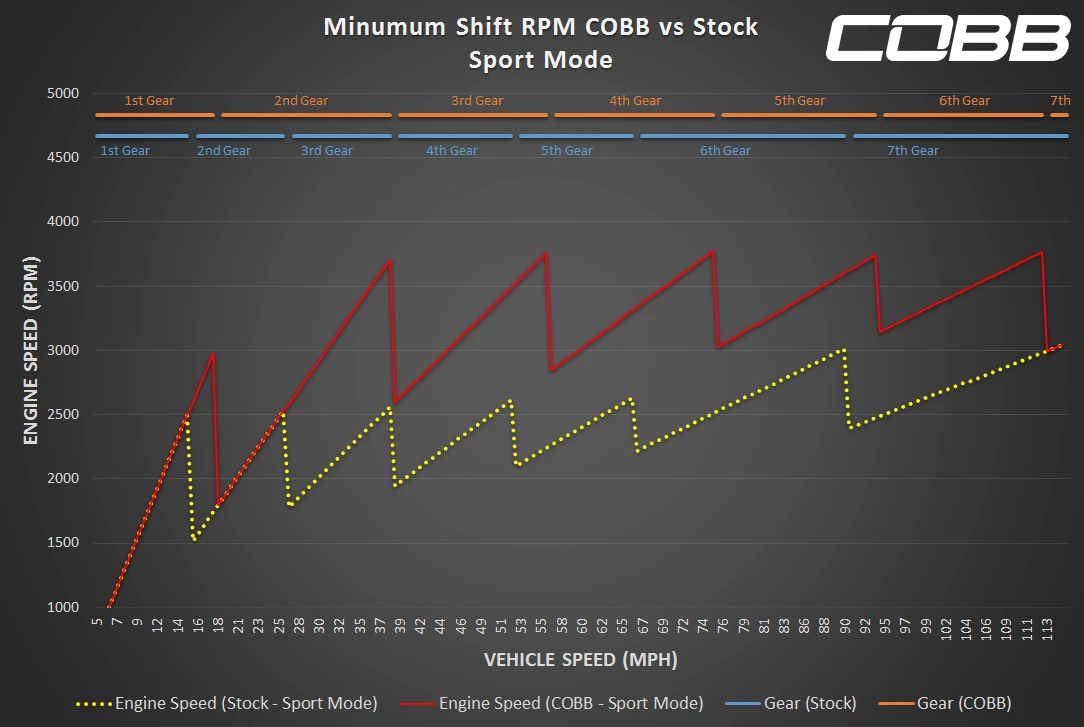 This feature increases the highest RPM at which the PDK will shift to the next gear in Normal, Sport, and Sport Plus drive modes. 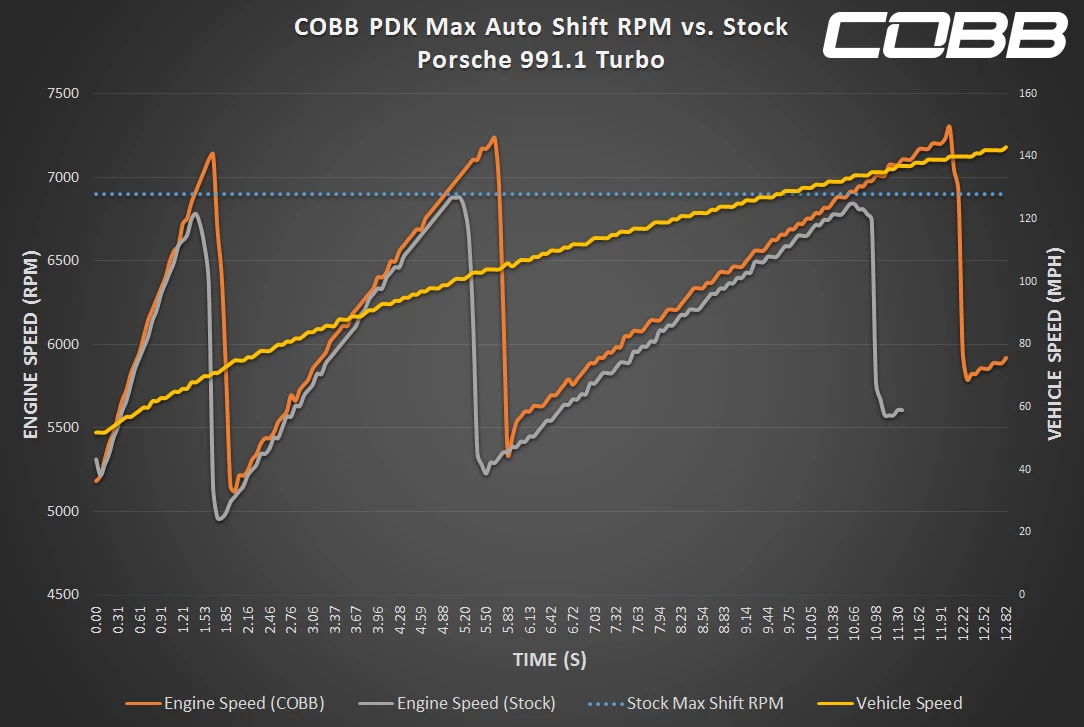 COBB Sport, COBB Aggressive, and COBB High Torque Aggressive maps decrease the RPM at which the clutch is engaged in continuous slip, generally between 1000-2500RPM.