With ever-increasing power and torque output and gross weight of Subaru WRX/STI and related automobiles, the propensity for the engine to rock fore and aft is more apparent. The Subaru Symmetric AWD system outputs the front half shafts directly from the engine mounted transmission while the rear properller shafts from traditional location.
This results in torque-induced rocking and pitching as engine power is applied and subsequently, lifted.

The OEM part is designed to reduce this effect but has compromises as a mundane car.  For racing use, and much greater response, as well as increased accuracy in driveline alignment, we've designed a replacement made from billet alloy, with heavier duty rubber bushings.   Recommended to be used with Cusco engine mounts and transmission bushings.

Resulting effect is that the drivers can more accurately enjoy sharper steering control as well, and predictability from throttle-induced handling inputs. 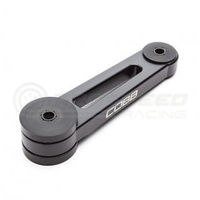