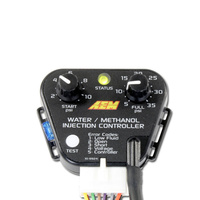 One is boost dependent for forced induction vehicles up to 35 PSI of boost (kit PN 30-3300). The Boost Dependent controller has an on-board manifold absolute pressure (MAP) sensor with a molded-in nipple for a boost hose pickup.

Robust, Easy to Use Controller Designs:

The new controller designs (Boost Dependent Kit PN 30-3300 & Multi Input Kit PN 30-3350) feature large, turn-resistant knobs and larger numbering to easily set accurate start and full activation points, with covered status LED and test buttons for added splash resistance. A plug is integrated into the controller housing for mating to the redesigned wiring harness’s positive-lock connector. The Boost Dependent controller housing has a molded-in, barbed nipple to accept a boost hose and a wiring legend on the back. Both controller housings feature an easy to access integrated fuse and molded mounting tabs.

AEM’s Water/Methanol Injection kit’s wiring harness is terminated with a positive-lock connector on one end and has color-coded wires to ease installation. Both the power and ground wires for the pump are included in the harness which simplifies the wiring process and eliminates any chance of the pump accidentally activating from a short in the system. An additional wire is included for adding an optional on/off solenoid to stop fluid flow when the system is inactive.

The controllers in AEM’s Water Methanol systems include an integrated “Boost Safe” output feature that monitors the entire injection system and triggers a ground signal via an output if it detects a voltage-related error (short, bad connection, broken wire, overheated pump, high or low voltage signal, etc.), allowing users to define their failsafe strategy from something as simple as flashing a warning light to more advanced strategies like pulling boost or ignition, or switching fuel maps on a standalone engine management system. Combined with the integral and highly accurate conductive low-fluid switch in the tank, “Boost Safe” can also put your engine in safe mode before the system runs dry. This exclusive feature is found only on AEM Water/Methanol Injection Systems.

AEM’s internally-bypassed water/methanol injection pump does not cycle on and off and provides quiet, smooth operation. It features robust construction including integral hose fittings, EPDM seals and a Santoprene diaphragm that provides consistent and reliable fluid delivery.

AEM’s gas Water/Methanol Injection Systems are available with or without a compact 1.15 gallon tank that features an anti-starvation reservoir. A more accurate, conductive low level fluid sensor is integrated into the tank and features a positive lock connector with color-matched wires to the wiring harness. The sensor eliminates any chance of incorrect readings due to interference from debris.

The term “liquid intercooling” with water/methanol injection refers to a highly atomized mist of water/methanol that is injected into the airstream and begins to evaporate. As it does, this evaporative effect reduces air charge temps by as much as 100 degrees, and delivers a more oxygen-rich air charge.

Water absorbs heat, and methanol is a cool burning, anti-knock rated fuel. When combined and introduced into the inlet stream, they can effectively increase your vehicle’s anti-knock index so you can reliably increase boost pressure and advance ignition timing using pump gas.

Modern vehicles fitted with Exhaust Gas Recirculation (EGR) devices for emissions control promote heavy carbon build up inside the air intake. This carbon build-up can create ‘hot spots’ in the combustion chambers that can cause detonation. Water/methanol injection has a ‘steam cleaning’ effect that reduces this carbon build up, and in some cases can increase fuel economy. 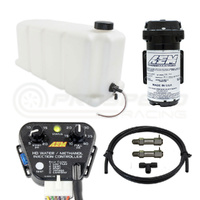 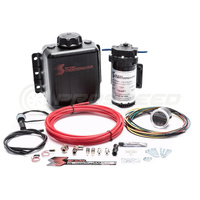 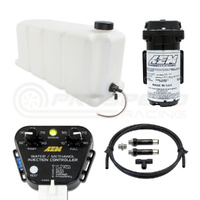 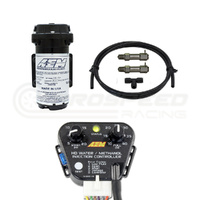